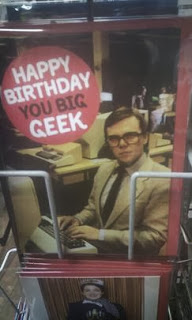 This guy in the picture (1982) has never been a geek, not at all.
He was a musician, Juice Lekinen's fellow, but he gave up soon.
made children's music (Juice L said, when the guy softens, it will start to make children's songs)
-> and further he was a famous ass-licking of white trash.
He ever had no boots.
Now he is one Conservative MP.

But took the back himself on the rock concert stage in year 2004:


will you do the same after him?