Idling frustrate? - we have the drunken army 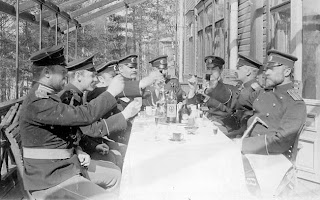 While each year, the Finnish armed forces commit to limiting their future expenditures to a state-appointed budget mandate, and nothing will be happened,
(special if you stop masterbating but you feel frustrated all day bcoz is's natural thing ).
The military spends trillions of euros of tax revenue each year.
goes on to state general deficiencies in the military’s financial management and internal compliance with regulations. For alcohol alone has been used in the defense budget in 2004-2012 of more than two billion of euros.
On December 2, another NAO report criticized the administration of Finland’s crisis management, stating that risk assessments were superficial and objectives loosely contrived. The auditor also said crisis management reports were of a poor and uneven quality.
The Ministry of Defence has replied by asking to know what is contained in the NAO’s 19.1 billion euro sum. Defence Headquarters denies that mandates would be transferred in violation of the statutes and a likely explanation can attributed to technical problems.
NAO Chief Auditor Erkki Pitkänen says the issue became apparent in the general audit. The NAO says it has informed the Defence Forces of similar problems in previous audits between 2002 and 2011.

Recently The Minister of Defence Carl Haglund said on Yle’s morning TV programme that there is impossible to measure the economic benefit of crisis work.  Finnish troops participate regularly in crisis management operations throughout the world.