I know your, you are a speaker of truth 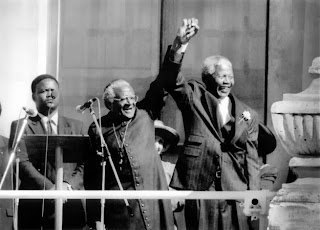 Desmond Tutu not attending Mandela funeral
Spokesman says Tutu, a critic of the ANC, has not been given accreditation but government insists he is on guest list. but Desmond Tutu is "definitely on the guest list".
The spokesman of the Tutu-family has since confirmed that the retired archbishop will be attending the funeral on Sunday in Qunu. Nothing can explain the abrupt change of heart, and he is now at there.

South Africa's retired Archbishop Desmond Tutu will not attend the state funeral on Sunday for his friend and fellow Nobel peace laureate and anti-apartheid hero Nelson Mandela, his family spokesman has said.
Just over a month ago, President Martti Ahtisaari said that he fears the situation when Mandela dies, and as a


Demond Tutu's own position has changed.

Mandela, who died last week at the age of 95, had a close friendship with Tutu forged in the struggle against apartheid.

According to Reuters Tutu's absence from the global icon's final farewell raises questions about the outspoken clergyman's strained relationship with the current South African government and ruling Africa National Congress, so called ANC party.
Tutu remains one of the country's leading moral lights and chaired the Truth and Reconciliation Commission, the body set up after the end of apartheid to examine human rights abuses.

Since the end of apartheid in 1994, Tutu, 82, has become a fierce critic of the ruling to ANC, accusing it of losing its way and straying from the ideal of a Rainbow Nation of shared prosperity that he and Mandela had envisaged.
Tutu has criticised President Jacob Zuma's leadership and in 2004, under then President Thabo Mbeki, he accused the ANC of promoting `kowtowing´ and said its black economic empowerment (BEE) policies were helping only a small elite.
Mbeki gave a scathing response, saying Tutu's comments on economic empowerment were `entirely false´ and accusing him of  `empty rhetoric´.
?
They are so deep in the in decay that without even realizing it,
is this true.
I understood in accordance with Ahtisaari's speach, that it were so.