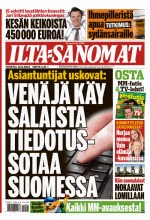 The Continuation War (Finnish: `jatkosota´; Swedish: fortsättningskriget; 22 June 1941 – 19 September 1944) refers to the hostilities between Finland/Nazi-Germany and the Soviet Union during World War II, from 1941 to 1944.
Due to the changed situation, Soviet Vyacheslav Molotov made a visit to Berlin on 12–13 November 1940.
He wanted Germany to withdraw its troops from Finland and stop enabling Finnish anti-Soviet sentiments. He also reminded the Germans of the 1939 Soviet–German non-aggression pact. Hitler asked how the Soviet Union planned to settle the `Finnish question, according to Adolf Hitler.
Perhaps Molotov answered that it would happen in the same manner as in Bessarabia and the Baltic states.
About this discussion still we have only one source, Adolf Hitler self, but it went so that Finnish swallowed all that without hesitation.

Already on 18 December 1940, Hitler had officially approved Operation Barbarossa, the Nazi invasion of the Soviet Union.
The Finnish government was not informed until 9 June 1940 that the country would start mobilization of reservists due to tensions between Nazi-Germany and the Soviet Union.
On 22 June 1941, the German leader Adolf Hitler gave the order to start planning an assault on the Soviet Union. Hitler spoke at radio that morning Hilter said that war-brothers the Finns and Nazis start to fight were `im Bunde´ against Soviet Union.
Unlike Hitler's dynamic swastika Finnish swastika stands always straight.