All of the very hardest boozing habits 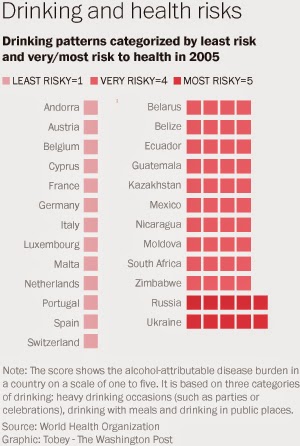 The world’s boozing habits, by WHO, but revealed in Washington Post:
there are some surprises.

Where are finns, norwegians, Brits ..?
Russians are there. Not surprise.

I must say some kind of surprise is laying in many of Muslim countries, how much they used to drink out there - and women too like to boozing.


Some says there, it is worth noting that some countries are probably selling alcohol but not consuming it - Andorra being a very clear example, where people of other countries go to buy tax-free alcohol.
It should be noted Estonia too, it sells to finns.
Sure, there's no social or demographic context to these figures with some nations.