There was a proposition 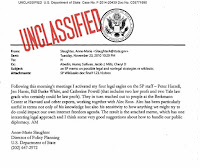 It came as a new report claimed Hillary Clinton had proposed a drone strike to take out Julian Assange in 2010. Read more.
Yes, I remember this time everybodis talked about drones.
They used to threaten with those mentioned weapons..
... a new report claims that Clinton once proposed a military drone strike to take out Assange in a bid to silence WikiLeaks. Beside, one of Clinton's aides sent an email with the subject line ‘an state.cov memo on possible legal and nonlegal strategies re Wikileaks’In 2010,
Assange had already released records that divulged secret US documents about the war in Afghanistan in July and about the war in Iraq in October.