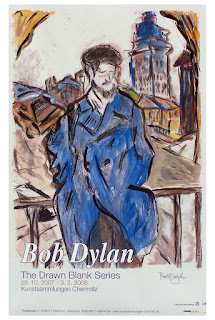 In the autumn of 2008, the National Gallery of Denmark contacted Bob Dylan through his manager and Agreed to stage his first major exhibition in Copenhagen.
Regarded Dylan The Drawn Blank Series as a finished project (I saw it).
but they embarked on an entirely new series of paintings. It sparked a period of intensive work and creativity as Dylan produced a series of more than forty paintings in less than a year.
He does not write anymore but received the Nobel Prize, Nobel Peace Prize would also have been possible, I think so.