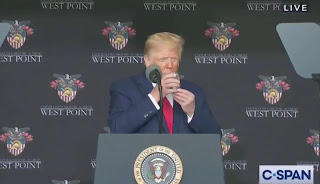 I like to see that.
The president of U.S. Donald Trump looks like A very weak commander-in-chief during sleepy West Point commencement address.
He delivered an address to West Point Academy graduates on Saturday, hoping to use the military to prop up his failing presidency, but it was a complete flop as he only reminded everyone watching just how weak he is.

1) The president stuck closely to the teleprompter,
2) with slowly delivering each word without the emotion or passion
3) he stumbled over words and names, while showing that he apparently isn’t strong enough to hold up a glass of water with one hand.
I hope this episode was the beginning of the end.

So Donald Trump has liked to reserve the term `sleepy´ for his Democratic opponent, Joe Biden, but his speech to West Point cadets showed that maybe the president, not Biden, deserves the moniker. 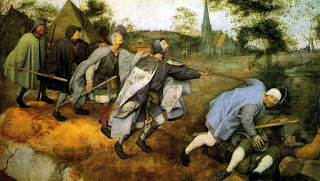 Yes, Biden, sunglasses on his head looks like that only the blind stick is missing in a picture. But I guess it's just an image.
Perhaps U.S. dominance in the world has already ended.