Police will soon investigate this crime? 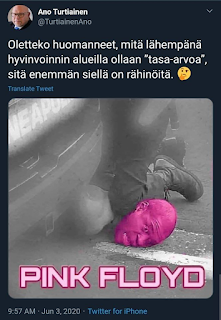 Ano Turtiainen (true finns), who won a seat in the Parliament from Southern Finland, has tweeted about the case of George Floyd.
In this tweed (lately deleted) he asks, but the true essence of messages subtance, glorifies brutal violence and racist segregation of people.
Sure, The True Finns Party is not the only party with lawmakers with criminal convictions.
But Turtiainen in December 2015 described attempts to burn down reception centres as “elimination missions” that are crucial for “protecting our independence and security”.
Turtiainen filed an appeal against a fine issued on him for public incitement to an offence. He appeared before the Eastern Finland Court of Appeal in Kuopio in May 2019.

btw,
Syd Barrett created the name Pink Floyd. The name is derived from the given names of two blues musicians whose Piedmont blues records Barrett had in his collection, Pink Anderson and Floyd Council.