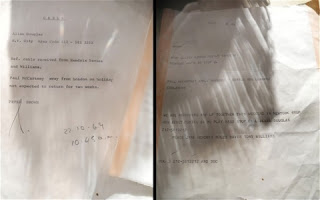 According to Far Out Magazine when Jimi Hendrix arrived on the scene in London he blew everybody away and really did change rock and roll almost overnight. His psychedelic musings may have even influenced Paul McCartney during the making of his masterpiece Sgt. Pepper. It would be under the influence of The Beatles that Hendrix would get his shot at the Monterey Pop Festival in 1967. It’s fair to say that Hendrix was influenced by The Beatles too.

In 1969 Davis and Hendrix sent an impromptu telegram to Paul McCartney with the hope they might convince him to join their new supergroup. A telegram was sent to Apple Records on Oct. 21, 1969.
The note read


We are recording and LP together this weekend in NewYork. How about coming in to play bass stop call Alvan Douglas.

Unfortunately, the recording would never take place as Rolling Stone reports no one knows, what has happened.
It’s still unclear if McCartney was aware of the request. Beatles aide Peter Brown responded the next day, telling Hendrix and Davis that McCartney was out on vacation and wasn’t expected back for two weeks.
Unrealized history is interesting.
But official history is not interested in it.