Real top-level overview of the drug phenomenon in Finland 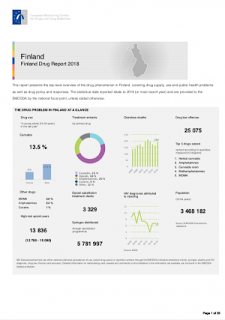 The latest European average drug-induced mortality rate among adults, aged 15-64 years, was 22 deaths per million. In Finland, this rate was 53 deaths per million in 2017.
Drug poisoning is the second most common cause of death for men under 40 in Finland.

See this report. It presents the top-level overview of the drug phenomenon in Finland, covering drug supply, use and public health problems as well as drug policy and responses.
Following resolutions for the period 2016-19. This is focused primarily on illicit drugs and covers five themes:
- national coordination of drug policy.
- prevention and early intervention.
- addressing drug-related crime.
- drug treatment and harm reduction.
- EU drug policy and international cooperation. Alongside the Government Resolution on Drug Policy.
Years 2016-19 Finland has a separate Action Plan on Alcohol, Tobacco, Drugs and Gambling Prevention, which was launched in December 2015 (but nothing ha done)
The statistical data reported relate to 2018 (or most recent year) and are provided to the EMCDDA by the national focal point, unless stated otherwise.